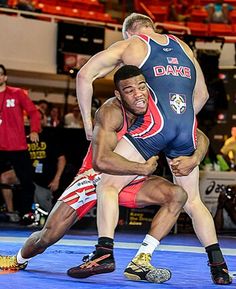 Freestyle and Greco-Roman Wrestling are also known as Olympic Style Wrestling. These are the two styles of wrestling that are practiced in the Olympics. In freestyle wrestling, participants can use their legs as both offensive and defensive weapons, which is not permitted in Greco-Roman wrestling. In addition, freestyle wrestlers can attempt to take an opponent to the mat with a single or double-leg takedown. However, Greco-Roman wrestlers cannot Grab their opponents below the waist at all. Wrestlers in the two sports use significantly different techniques and strategies when Grappling. Greco-Roman wrestlers also cannot use their legs to make contact with their opponents, making it more difficult to secure a takedown.

Freestyle wrestlers can throw an opponent to the Ground and reGain contact with him/her afterward to apply a hold. A Greco-Roman wrestler, however, must maintain contact with his opponent throughout the takedown for the hold to count. The referee will stop an illegal hold immediately if the two lose contact, making it vital for a Greco-Roman wrestler to accompany his opponent to the Ground.

When wrestling in a Freestyle and/or Greco-Roman competition, a wrestler must wear either a red singlet or blue singlet. Unlike Folkstyle, there are no green and red ankle bands. Wrestlers must either have two separate singlets to change into, or they must have a red/blue reversible singlet.

Sibling discounts are available for monthly and annual packages for families with two or more children enrolled. Learn more today!